Day 14 (06.01.2015) started pretty much the usual way. One thing that comforted me was, It wasn’t as cold as the last day.  I was super excited about this particular place, where we would be spending our day and there is a small story behind it.

Flashback time… Let the mosquito coil rotate.
Once upon a time in Chennai, I was at my office and this fellow AswinYogesh returned back from Yatra. He got me a couple of souvenirs, a handcrafted pocket diary for me and a mobile pouch for my sister. When I asked him where he got those from, he replied it’s from Tilonia, a village Rajasthan. When I asked him more about that place, he asked me to search about it myself (That lazy he is). I initially thought it’s just a village known for its art and crafts, but soon realized it’s much more than that (adhukkum mela). One can’t miss reading about Bunker Roy & Barefoot College while searching about Tilonia. After watching Bunker Roy‘s below TED talk, I got Inspired and badly want to visit Tilonia, and that’s where I decided to apply for the Yatra. So, It’s Aswin’s souvenir and Barefoot College were my key inspirations for the yatra and that’s where the short story ends.

Our Train reached Tilonia station and the famous Barefoot College was just a walk away. On entering the campus, what hit my eyes where massive Parabolic Scheffler Solar Cookers. We were welcomed with an awesome welcome song by the kids there. After a brief introduction about the campus, we were asked to go around and have a look around in groups. Our 1st stop was their Solar Training Centre where the Barefoot Women Solar Engineers are being trained. So, what comes to your mind when you hear the word “Engineers”, young guys and girls in a formal attire?, This place will change your perception for sure. What I saw there was totally different, a long table filled with electronic equipments and old women on the either sides working. Being from different parts of the world, they communicate and learn using sign language. A 60 year old grandma there will amaze you with her superior skills, which can put your electronics 101 to shame. Our next stop was Tilonia Bazar, where I bought few souvenirs. Then, after our lunch, we also had Pushpa, a yatri from Tilonia, who is kind enough to host us in her house for a while and treat us with some sweets. 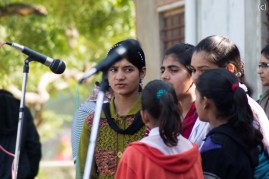 WOW, She is a solar trainer, PC : Charen

Their classroom is bid different, isn’t it ? , PC : Charen

Tylor and a solar mom, Look at the board behind him, PC : Charen

Age doesn’t matter. It’s me and vishal with a solar mom.

She said it’s a PCB.

I was charging my mobile there.

That coolers aren’t mine, With Vindhya mam, PC : Charen

Another kilometre of walk took us to the new campus of Barefoot College. They had one more, bigger craft bazaar there, so bit of splurging there too.  My long wait was over, when Mr. Bunker Roy addressed the gathering of Yatris, Followed by his wife Mrs. Aruna Roy. She is one of the activist who was very instrumental in bringing up Right to Information Act 2005 and co-founded Mazdoor Kisan Shakti Sangathan. 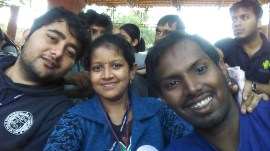 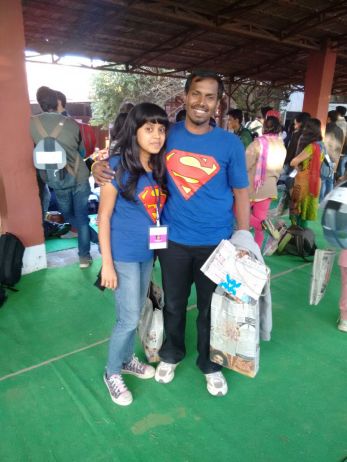 Being Superman himself, He was actually making fun of my superman t-shirt . With Bunker Roy

After wrapping up with Barefoot College, we headed to Ajmer station to board back our train. It was super fun on our way back, and dancing with Akash and other friends in the bus is one unforgettable yatra moment for me. The fun continued even at the station until our train arrived, and the journey continues.