Don’t be surprised for publishing the post a little earlier than usual. Also, this post is predominantly just about one place and it’s totally worth it.

A short recap from the last blog post to bring you up to the speed. Inspired by the below song, I convinced 4 of my friends to travel along with me all the way to Amritsar. On our 2nd day of the journey, we visited the most famous Attari – Wagha Border between India and Pakistan. And, it was one remarkable experience.

By now, you all might have guessed the place. It’s none other than the Sri Harmandir Sahib, famously known as the Amritsar Golden Temple. From the local sources, we got to know that the Gurdwara is less crowded during the early hours of the dawn. Kavinnila  (a.k.a Kavin) and I were super excited and planned to start as early as 4 am. On the other hand, Shashi, Remya and Shalini was super tired after a crazy day, so they decided to opt out for some more rest and join us later.

As planned, we started a little later than 4 am. As our hostel was just in walking distance from the Gurdwara, we didn’t have any trouble reaching there. It’s a hard rule that men and women who enter the temple must cover their head by wearing a scarf or a turban. On our way to the temple, there was a respectable old man who offered me a headscarf and even tied it on my head. Later, he DEMANDED DONATION for the same. It’s quite unfortunate that there are people capitalizing situation like these. If you are visiting the temple, kindly don’t entertain such people. There are tons of head scarfs placed in bins just outside the Gurudwara for free.

One could get easily awestruck by the glittering structure against the background of the dark sky. And, I am no exception. Just before the main entrance, there is a place where you can safely deposit your footwear for free. A continuous stream of water flowing through the entrance cleanses your foot before entering the temple premise. OMG, I have never been to such a peaceful and calm religious place. I felt the tranquility of the place subdue my usual excitement. And, quite short of words in precisely expressing that feeling. The main temple sits in the middle of Amrit Sarowar (Pool of Nectar), a holy tank where devotees take bathe. We went around the Parikrama (Pathway surrounding the tank) clicking some pictures before joining the queue leading to the sanctum. I am not even exaggerating, the devotees here are the most self-disciplined ones I have ever seen. Firstly, there are no separate queues except the one dedicated for elderly and physically challenged people. Irrespective of their caste, creed, gender, social and economic status, the rest of the folks share the same queue. In spite of thousands of devotees waiting in the line for hours, we didn’t find even a single person trying to push others or trying to get ahead or even speak loudly. Probably, we are the only uncouth ones in the crowd who are incapable of zipping their mouth. You would be amazed to see that there isn’t anyone except just an elderly guard near the entrance of the sanctum to control the crowd. All the time spent in the queue I enjoyed the devotional songs with marvelous deep voices played there. To my surprise, while entering the sanctum, I spotted a group of musicians performing live. That’s some incredible stamina and serious devotion performing continuously without any drop in their energies. A few moments passed entirely lost in the charm and resonating music of the place. Again, the blissful experience is hard to explain with words. It’s two storied structure with its walls & ceiling filled with pleasing decorative artworks. The devotees quietly find a spot for themselves to sit, read their holy text and meditate. Again, there is no one to control or manage them. Further, we reached the terrace just to get lost in the breathtaking view from there. We were offered Karah Prasad, a sweet made of whole wheat flour, Ghee (clarified butter) and sugar on our way out of the sanctum.

The following are a few awesome pics clicked by Kavin. 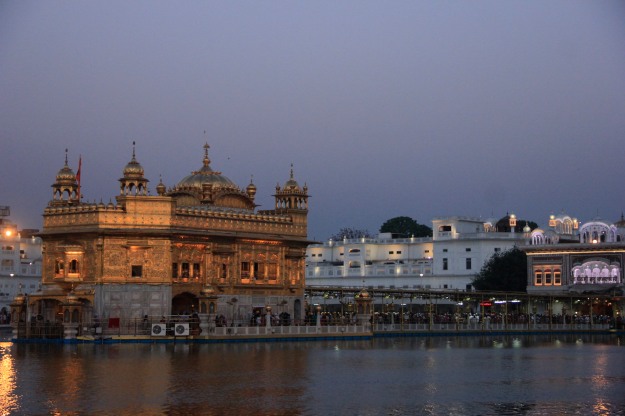 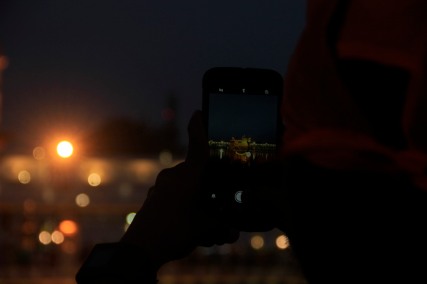 Someone is busy clicking

Father teaching the kid to pray

Look at the size of these fishes

Reflection of the Devotion

He caries the burden of faith on his head

The Karah Prasad didn’t completely solve our hunger problems, so we headed straight searching for the Langar Hall.

Langar is the term used in Sikhism for the community kitchen in a Gurdwara where a free meal is served to all the visitors, without distinction of religion, caste, gender, economic status or ethnicity. – Wikipedia

So, no one returns from a Gurdwara hungry. Might be the effect watching umpteen number of documentaries on the Golden Temple Langar, it became a dream to have a meal there, cos it’s no ordinary Langar. Following are the amazing facts that make it more special[Source].

Just at the entrance of the hall, the volunteers handed us a plate, a spoon, and a bowl. After waiting amongst 1000s of devotees, we were allowed into a large dining hall with carpets laid in parallel rows to sit down and eat. With not much difficulty, we found ourselves a spot amidst a large crowd. Then, they served us, Roti (flat bread), Daal (lentils), Sabzi (vegetables) and Kheer (dessert). OMG, the food was not only yummy but felt soulful and wholesome. Once done eating, we handed our plates and cutleries to another set of volunteers stationed at the exit of the hall. It’s quite amazing that the Langar is run entirely out of donation from the Sikh community across the globe. Their philanthropical mindset and natural willingness to serve people is highly commendable. I came out of the Gurudwara with both my soul and stomach filled. I am never a religious person, but the vibes this place gave me is beyond any typical place of devotion. It was a long dream come true for me and definitely, a moment to remember for the rest of the lifetime. Waheguru Ji Ka Khalsa Waheguru Ji Ki Fateh. 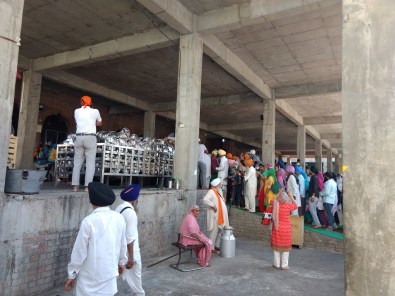 Devotees waiting to get into the Langar Hall

Finally got our spot

A few meters walk from the Golden Temple took us to yet another significant landmark, not only in Amritsar but also in India’s struggle for independence. It’s Jallianwala Bagh where the sorrowful Amritsar massacre took place. On 13th April 1919, Reginald Dyer a British army Colonel ordered open fire at unarmed innocent civilians who gathered to celebrate the festival of Baisakhi which resulted in the infamous Jallianwala Bagh Massacre. Around 1000 died and 1500 injured in this Mishap. One could still see the bullet marks on the wall and the Martyrs’ Well where many jumped to save themselves from the shooting. The place also houses a small museum to provide more detailed info on the incident. This place reminded me of the sacrifice made by many that lead us to the path of freedom that we enjoy today.

Entrance Of The Garden 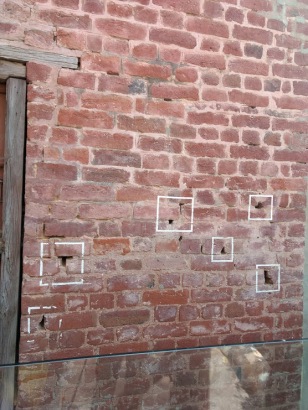 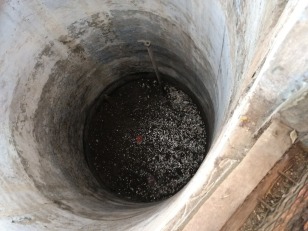 It was already past 1 pm when we got united with the rest of the gang after visiting the Jallianwala Bagh. We all were hungry by that time and unanimously decided to have lunch at a nearby Dhaba. There is no way we would miss the famous Amritsari Kulcha while being in Amritsar. The Dhaba served a yummy Kulcha with some Chickpea Curry and a sour chutney which I loved. From there we reached our hostel, freshened up, packed our bags and headed straight to the railway station to catch Amritsar – New Delhi Shatabdi Express that’s destined for Delhi. 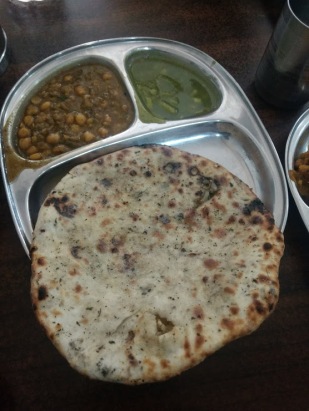 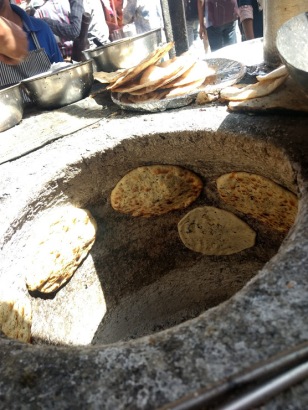 Kulcha in the making

Wait, the day didn’t end here. A couple of interesting things did happen. The first one was a sheer coincidence. We again shared the compartment with the same family that traveled with us from Delhi to Amritsar. The next one was a pleasant surprise. A Postcrossing friend Mr.Piyush came all the way to Ludhiana railway station to handover me some awesome postcards when our train halted there. The best part was, my phone was in silent mode and didn’t hear the ring when he called. The train just started moving when I returned his call. As the train was already in motion, he came running and handed me the envelope. That’s an extraordinary gesture to show towards a person whom he oddly knows. Thanks, Piyush. It means a lot to me.

They served ice cream too

Phew, That’s how yet another incredible day came to an end.

The next day had some serious twist and turns for us. But you got to wait until the next blog post in the series.

This site uses Akismet to reduce spam. Learn how your comment data is processed.